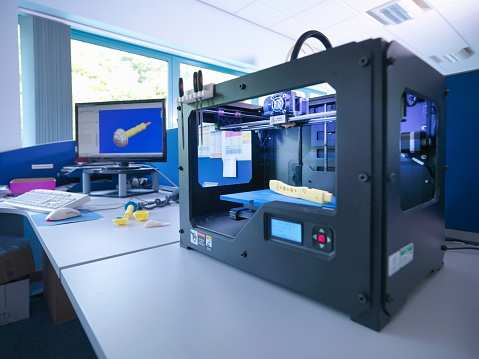 New York: Consumer-grade 3D printers emit particles that can negatively impact indoor air quality and have the potential to harm respiratory health, according to a new study.

"All of these tests, which were done at high doses, showed that there is a toxic response to the particles from various types of filaments used by these 3D printers," said Rodney Weber, Professor in Georgia Tech's School of Earth and Atmospheric Sciences, who led the research.

The overall 3D printing market is expected to grow from $9.9 billion last year to $34.8 billion by 2024 and consumer 3D printing is accelerating.

3D printers typically work by melting plastic filaments and then depositing the melt layer upon layer to form an object.

Heating the plastic to melt it releases volatile compounds, some of which from ultrafine particles, that are emitted into the air near the printer and the object.

In earlier research, the team found that generally the hotter the temperature required to melt the filament, the more emissions were produced.

As a result, acrylonitrile butadiene styrene (ABS) plastic filaments, which require a higher temperature to melt, produced more emissions than filaments made of polylactic acid (PLA), which melt at a lower temperature.

To test the impact of the emissions on live cells, the researchers partnered with Weizmann Institute of Science in Israel, which exposed human respiratory cells and rat immune system cells to concentrations of the particles from the printers.

They found that both ABS and PLA particles negatively impacted cell viability, with the latter prompting a more toxic response. But these tests did not reflect actual exposures.

The study was part of multi-year research project aimed at characterising particle emissions by the printers in a controlled environment and identifying measures that could be taken by both 3D printer manufacturers and users to reduce the potential for harm.

"The toxicity tests showed that PLA particles were more toxic than the ABS particles on a per-particle comparison, but because the printers emitted so much more of the ABS - it's the ABS emissions that end up being more of the concern," Weber elaborated.

Taken together, these tests indicate that exposure to these filament particles could over time be as toxic as the air in an urban environment polluted with vehicular or other emissions.

The study also looked at which types of indoor environmental scenarios emissions from a 3D printer would most impact.

They estimated that in a commercial building setting such as a school or an office, better ventilation would limit the amount of exposure to the emissions.

However, in a typical residential setting with less effective ventilation, the exposure could be much higher, they reported in a paper published in the journal Environmental Science & Technology.

"These studies show that particle and chemical emissions from 3D printers can result in unintentional pollutant exposure hazards, and we are pleased to share this research so that steps can be taken to reduce health risks," said Marilyn Black, senior technical advisor for UL.